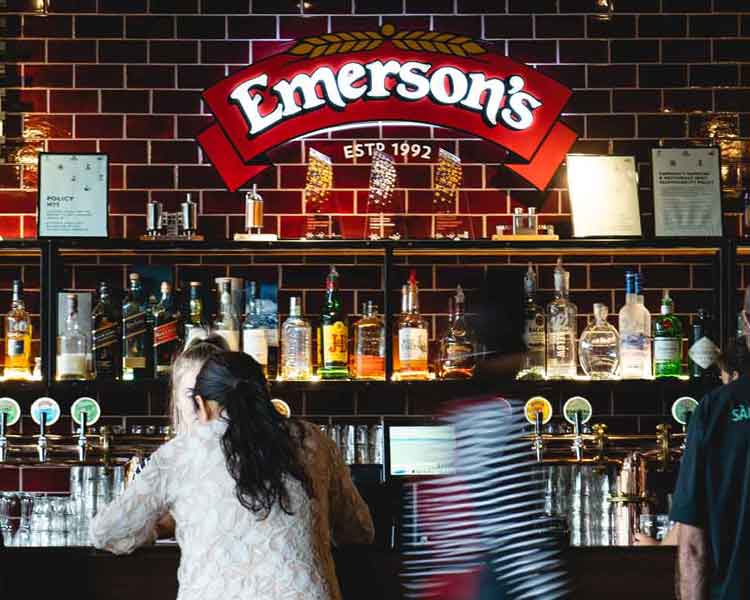 Richard Emerson started brewing beer in a cold student flat. These days Emerson's Brewery churns out up to 15,000 litres of premium craft beer five days a week at their swanky new premises just a stone's throw from the Forsyth Barr stadium. With a fabulous restaurant also on site, and daily brewery tours available, a visit to Emerson's is a must-do for beer lovers.

Brewing in Dunedin since 1876 and fed by a natural spring beneath the site, Speight’s is one of the few gravity-fed breweries left in the world. Take in a brewery tour and then pop next door to the Alehouse restaurant for a Tasting Tray, expertly matched with the menu, should you fancy a bite. Fresh spring water is available from the Speight's tap outside too, join the queue and fill your bottle.

Offering a blossoming range of fermented beverages to influencers and taste-makers. If you're looking for something distinctive and completely unique, you'll find it here. Open Wednesday to Sunday, 3-8pm.

This small family brewery is just north of Dunedin, sitting on the shore of Blueskin Bay. It’s focused on brewing small batch handcrafted beers for the people of Dunedin. Its small bar has a real community flavour, regularly featuring live music and food trucks. Open on Fridays, Saturdays and Sundays.

Noisy Brewing Co. is a little Dunedin brewery which opened in 2018, supplying various bars around the city. You can also join the aficionados and buy Noisy brews direct from the cellar door.

Currently working on a stylish new taproom, this team is taking a break from brewing, but they’ll be back on deck before you know it in their new Bond Street laneway premises. Steamer Basin brews using low-tech, traditional methods to make well-balanced beer that is enjoyable to share and celebrates our place. As well as their year-round beers, Steamer Basin produce small batch seasonal beers using fresh ingredients – lighter in summer (Rhubarb Saison anyone?) and darker in winter.

Tucked away in a light and airy brick building on the corner of Filleul and Hanover Streets in downtown Dunedin, No. 8 Distillery crafts a range of award-winning boutique spirits and liquors and also holds workshops and tasting sessions. Sample their range of award-winning gins, rums and other delicious drops, made with a recipe passed down by the French distillers grandmother.

Crafting boutique gins and vodka, this Otago Peninsula-based distillery channels the beauty and wildness of the region into its locally-inspired range, made using locally foraged native botanicals among other more classic ingredients.

Going hand in hand with Dunedin’s craft gin boom, the Dunedin Distillery is a small batch operation which is literally raising spirits, from bread. Created by two Dunedin women with no previous distilling background, the distillery’s starting range is a London-based gin and a chocolate vodka. It’s also a true food upcycling success story, as the products are fermented from waste bread and bakery products. The team have set up shop in a new premise on Roberts Street, right next door to Ocho chocolate.

An intriguing new subterranean bar has arrived at no. 12 The Octagon, Mr. Fox is a den of cool, cocktails and tapas, tucked away below street level with a hidden courtyard space amongst the heritage buildings. Serving up signature ‘foxtails’ such as the Basil Brush Bramble, the Lost Giraffe and the Midwestern along with delicious titbits from the Bacchus kitchen upstairs, this is a bar worth trying.

Woof! Is a late-night bar located on the corner of Moray Place and Lower Stuart St. An eclectic, welcoming and surprising bar experience, accompanied by great service, carefully curated spaces and top-notch music. Scottish author and cocktail writer Damian Barr has had a hand in designing the cocktail menu and musician/culinary genius Stef Animal heads up the kitchen team.

Lively spot with alfresco seating on the corner of Princes Street and the Octagon, snacks and sit-down dining, often with live music after dark – get your dance on.

Get snug in this cosy corner of the Octagon, offering a wide selection of international and NZ beers, wines, spirits and whiskys as well as an extensive menu for brunch, lunch and dinner.

A great site for people watching on the corner of the Octagon and lower Stuart Street.

Find the lower Octagon doorway to this popular dance club and nightclub.

Craft beer and ciders and stone grill meats, views over the Octagon plus alfresco seating.

An enormous space with plenty of pool tables for you and your friends. Found on the Moray Place/Filluel Street corner.

Shhh, it’s a secret… cocktails, wine, tapas found down an alleyway in Upper Moray Place opposite the Rialto Cinema.

A chill vibe with welcoming, cocktail-shakin’ staff on Princes Street.

A gin bar with so many choices they’re running out of room for glasses to serve them in. As Joni Mitchell would sing, it has 'the whoosh of jungle blades and the crackle of northern ice'. Knowledgeable staff and live music.

This Irish bar and restaurant is in a classic publican’s site and hosts music and quiz nights.

Yes, the song list has everything from Euro-pop to K-pop and everything in between. Belt it out.

Near the city centre

Nothing beats a classic British-style pub on a cool winter's day and the Duke of Wellington is all that and more. The purveyors of fine ales from around the globe, this rather ornate establishment in the historic Warehouse Precinct of Dunedin has twenty-odd beers on hand at any given time and a cosy, wood panelled interior that lends itself to a few warming pints and a bit of banter.

It’s little, friendly, welcoming, with live music and a range of local and exotic beverages.

A characterful pub whose staff know the stories behind the great beer they serve with tasty food in this historic harbourside township.

A landmark 1874 bluestone pub and seafood restaurant on the banks of the Otago Harbour. Settle in and relax for the day.