COVID-19 update: Dunedin is now at the Red setting under the new COVID-19 Protection Framework. Get the latest information about the traffic light settings at covid19.govt.nz.

“We feel it’s a better fit for the size and nature of our conference offering in Dunedin, which has found its niche in association and boutique-sized conferences, especially those that can benefit from the academic strengths the city possesses.”

As part of Enterprise Dunedin, the economic development and destination marketing arm of the Dunedin City Council, Dunedin Business Events works to attract national and international conferences to the city. Dunedin’s share of delegate spend in the New Zealand business events market is worth approximately $16.4m per year. Some of this spend is generated by local businesses hosting events locally, but Dunedin attracts a large number of delegates from other parts of the country and abroad. Closer analysis suggests $5.6m of delegate spend in Dunedin was from international visitors, $6.5m was from visitors from other parts of New Zealand, and $4.3m was from locals.

While boutique conferences have been identified as the main source of medium-term growth, the city has proven successful in hosting a number of larger-scale events, such as TRENZ 2018. The compact city layout and wealth of recreational opportunities have also played a role in securing future events such as the 2020 World Leisure Congress.

Differentiation is an important aspect of the Dunedin Business Events offering, the unique heritage venues, access to local experts as keynote speakers and opportunities to view some of New Zealand’s rarest wildlife provide a strong point of difference.

In keeping with this, some of the new messaging developed as part of the rebranding plays on Dunedin’s perceived remote location, ‘We’ll go to the ends of the earth to make sure your event is a success. Oh, we’re already there’. 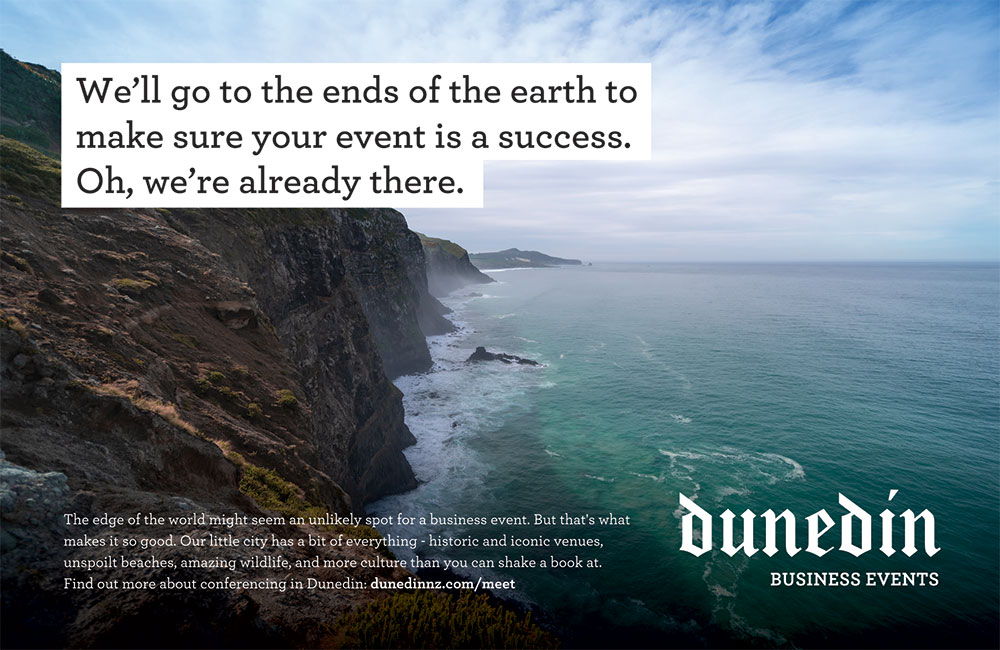